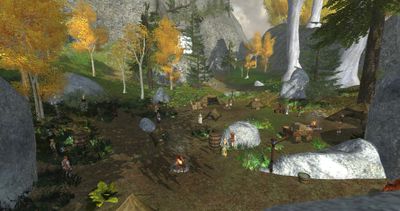 Echad Andestel is a settlement within Nimrodel in Lothlórien. [14.2S, 73.0W]

Located where river Nimrodel empties into Celebrant, just outside the border of Lórien, Echad Andestel is a settlement that has chief repeatable quests, a skirmish camp, a relic master, a forge master, and more.

The following services can be found within the settlement of Echad Andestel:

Traders from Dale travelling south became trapped at the foot of the Misty Mountains as the orcs of Moria poured forth, forcing the Elves of Lórien to grant them aid.