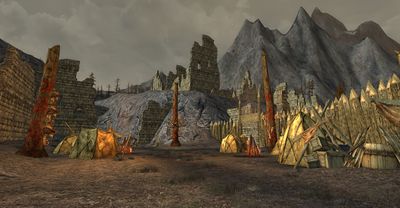 This ancient ruin of Rhudaur lies in the southwest part of the Ettenmoors, along a road that comes out of Gramsfoot. It plays a part of the never ending conflict in the Ettenmoors, much like the other contested locations.. It is always held by the Army of Angmar, much like Gramsfoot, but Dâr-gazag can be invaded and its guardians can be killed. It is much larger than some of the other locations such as Grimwood Lumber Camp and Tírith Rhaw, and the soldiers stationed there are much stronger. There is only one entrance inside, but several ledges to jump out of.

Dâr-gazag serves the Creeps as a fall back location and a place to get quests for Commendation and Infamy. It helps them to buy new upgrades, and get their maps from Dâr-gzag's neighbor, Lugazag. Some quests instruct them to go to Hoarhallow and slaughter hobbits, while others may ask for something simpler, such as collecting meat from the Bloodlust Leeches north of the keep. Beware: the Free Peoples do not always avoid this location, so it is not necessarily safe to go AFK in here.

Any relics currently held by the forces of Angmar (the Gift of the Carrock and the Fragment of Mordírith's Crown) will be stored in the room behind Tyrant Durgrat. The Tyrant's defenders are each linked to a Tower Keep in the Ettenmoors, if the Freeps hold both Lugazag and Tirith Rhaw, the Tyrant will be alone. After defeating the Tyrant, the Freeps can capture one of the Relics in the room behind him. This can be taken back to Ost Ringdyr to give a bonus to the Free Peoples outside of the Ettenmoors. 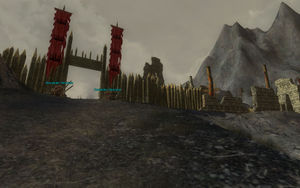 On the lower levels:

On the upper levels: