From Lotro-Wiki.com
(Redirected from Cirith Ungol)
Jump to navigation Jump to search 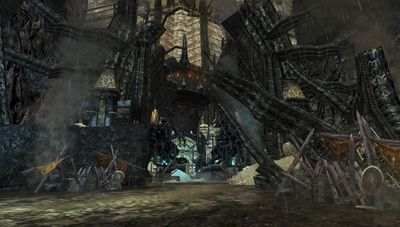 Cirith Ungol (Sindarin for Cleft of the Spider or Pass of the Spider) is a small area and a point of interest within Lhingris in the Plateau of Gorgoroth. [60.3S, 7.3E] It also contains three interior public dungeon spaces, together comprising the Tower of Cirith Ungol.

Player characters initially visit Cirith Ungol disguised as the Silent One to go among the Orc garrison. After completion of Necessary Sacrifices, the situation changes. Cirith Ungol becomes overrun by spiders, who fight against the remaining Orcs.

Note: Cirith Ungol does not have its own map. Opening the map displays the full Plateau of Gorgoroth map. All of Cirith Ungol is also displayed on the map of Lhingris, however, so it may be helpful to zoom in to this smaller map to get a better sense of location. Once you enter the tower itself there is a map of the interior.

These landmarks are located within Cirith Ungol: 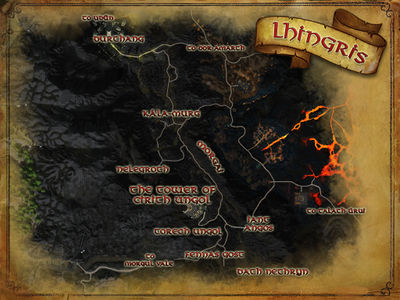 The Tower of Cirith Ungol was built by the Men of Gondor to keep watch on Mordor after Sauron's defeat at the end of the War of the Last Alliance.[1] The pass and the tower were named Cirith Ungol - "Pass of the Spider" - because Shelob had dwelt there since before Sauron came to Mordor.[2] By the end of the Third Age the significance of this name was not common knowledge, yet it was remembered that some horror lurked in the passes above Minas Morgul.[3]

Gondor's grip on Mordor was weakened by the Great Plague,[4] and at some point before the end of the year of the Plague, Orcs took Cirith Ungol.[2] It is also said that the Lord of the Nazgûl claimed the tower by treachery. Sauron had his servants occupy the tower, for both Gondor and he intended to use it to contain his slaves within Mordor.[5] The Orcs attempted to expand the tunnels under the tower, and in so doing intruded on Shelob's lair. In retaliation, she sent her children to kill everyone in the tunnels, yet relented before they reached the cellars of the tower itself. Most of the time, Shelob and Cirith Ungol had an uneasy truce, maintained by allowing her to feed on the Orcs occasionally.[2][6]

During the War of the Ring, the garrison of Cirith Ungol was under the command of Shagrat, who had Frodo Baggins imprisoned in the top chamber of the tower. A battle between Shagrat's garrison and an accompanying force of Morgul Orcs under Gorbag broke out when the Orcs coveted his mithril-coat. This resulted in the destruction of the entire garrison, except Shagrat, and Frodo's escape.[5] His successor, Captain Róglarg, refuses to believe his story, instead believing the rumour that it was a mighty Elf who wiped out Shagrat's Orcs. Róglarg says Shagrat was sent to the Black Pits for his failure.[6]

Two of the Gúrzyul seem to be involved in running Cirith Ungol: Ugrukhôr, Captain of the Pit, who sent Róglarg and his garrison to hold the tower, and Rûkhor the Pale Herald, who sent Belzagar, one of his emissaries.[7]