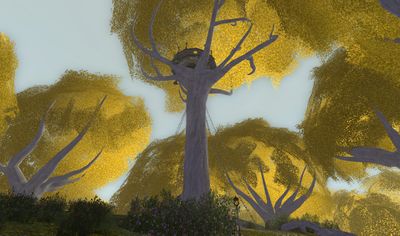 Cerin Amroth (Sindarin for Amroth's Mound) is a settlement within Cirin-en-Galadh in Lothlórien. [11.9S, 67.9W]

This small settlement is located north of Caras Galadhon and provides some minor services and quest givers.

This is the place where Amroth once had his home, and later where Aragorn and Arwen first met and fell in love.

Long ago, when Lothlórien was known as Laurelindórenan - the Land of the Valley of Singing Gold - it was ruled by the Elf-lord Amroth. Before Caras Galadhon was even a thought in the minds of Celeborn and Galadriel, Amroth built his home upon a hill which is now named Cerin Amroth.

Eventually, Amroth left Lothlórien and went south, where he built the haven of Edhellond and awaited the coming of his love, Nimrodel. She never came, and Amroth was lost at sea. It was at Cerin Amroth, in later years, that Aragorn son of Arathorn and heir of Isildur pledged himself to Arwen daughter of Elrond Halfelven and granddaughter of Celeborn and Galadriel.

It was from Cerin Amroth that Frodo Baggins saw his first glimpse of Caras Galadhon, the city of the Lord and Lady of the Galadhrim. [1]