Éowyn, the White Lady of Rohan is the daughter of Éomund of the Eastfold and niece of King Théoden of Rohan. Her brother Éomer became the heir to the thone of the Riddermark after the death of their cousin, Théodred. Éowyn is charged by her uncle, the king, to evacuate the inhabitants of Edoras and the Kingstead to the mountain-refuge of Dunharrow.

Éowyn is first encountered in the great hall of Meduseld, the seat of the kings of Rohan. She is concerned about her uncle's failing health and Gríma Wormtongue's growing influence in the capital.

Éowyn later armours up and can be found outside of Meduseld, atop the grand stairs leading up to the Golden Hall in Edoras. Here, she is overseeing the evacuation of the population of the capital and the royal riding, the Kingstead. Though she is not content with this task, given to her by her uncle, she nonetheless seeks to fulfill it as best she may.

After the successful evacuation of Edoras and the Kingstead, Éowyn can be found at the mustering camp of the Rohirrim at Dunharrow.

Under the guise of the name Dernhelm, Éowyn joins the host of Théoden's Riders and fights in the Battle of Pelennor Fields before Minas Tirith.

After the defeat of Sauron and the conquest of the Gorgoroth plateau, Éowyn joins the White Company moving into the Morgul Vale under Faramir's leadership as Dolenthol, a Ranger of Ithilien, and helps on several levels of the city.

in the Circle of Wrath

in the Circle of Sorrow

in the Circle of Madness

in the Circle of Death 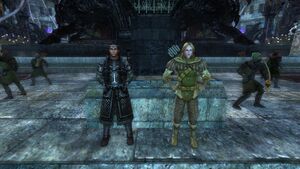