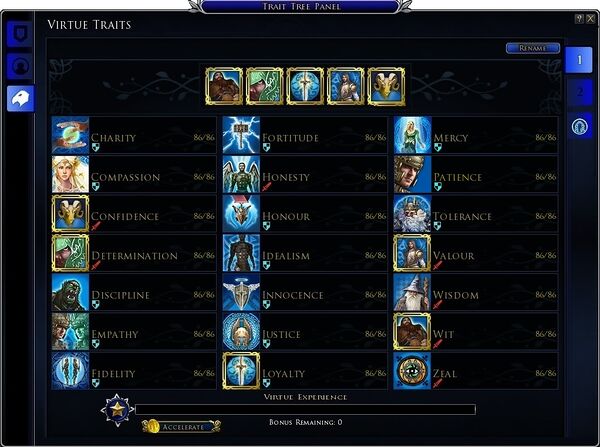 Virtues are a type of trait that characters can gain in Lotro. Virtues grant bonuses to stats and are an important part of improving your character.

Each Virtue grants bonuses to 3 different stats. The first stat listed on the tooltip grants the largest bonus, the next grants a somewhat smaller bonus, and the last stat listed on the tooltip grants the smallest bonus. In order to gain the stat bonuses for a Virtue it must be slotted by double-clicking it or dragging it to the top bar in the Virtue page of the Trait Tree Panel (which by default is accessed by the j key).

All Virtues also grant a small passive stat bonus (either to Maximum Morale or Physical and Tactical Mastery) even if they are not slotted.
(Note: even when you don't have any rank at all then you still get rank 1 passives.)

Virtue slots are unlocked as you level up:

Slotted Virtues are tied to each Trait build (specified using the numbered tabs on the right side of the Trait Tree Panel). Therefore players can have unique Virtue builds that accompany their Class Trait builds. Note that Trait builds can be switched at any time while out of combat.

To determine which Virtues provide the most benefit for each class and role, consult the following pages:

A Virtue marked as Earning

To increase the stat bonuses provided by Virtues, you must increase their rank. Virtues gain ranks when players acquire Virtue Experience ("Virtue XP") as a reward for completing a deed, certain repeatable quests, or Featured Instances. Only one Virtue can be ranked up at a time - the Virtue that is specified as Earning in the Virtue panel. To mark a Virtue as Earning, click it such that the text 'Earning' appears in green below the Virtue name.

A Virtue Maxed Out Alert

If you gain Virtue XP while your Earning Virtue is capped then the Virtue XP will go instead to a Virtue which is not capped in this order:

The following table lists the amount of Virtue XP required for each rank:

The following table illustrates which Virtues provide which stat bonuses.

Note: Cells in the table are colour-coded as follows:

For a complete list of all stat values for all ranks for each Virtue, see the Virtue page.

In addition, there is a Faction-awarded Racial Trait which adds 1 rank to each of 3 given virtues, if this trait is slotted as a Racial Trait.

Note: The Beorning can acquire a similar bonus at level 30 by completing the quest Hatred of Bear and Man which awards the trait Virtuous Beorning which increases Fortitude, Empathy, and Honour by +1.