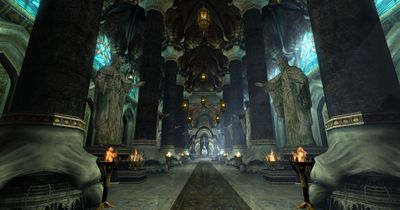 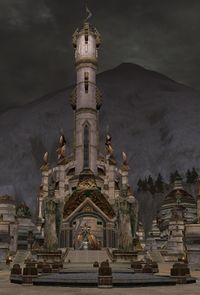 The Tower of Ecthelion, also known as the White tower, is a landmark within Minas Tirith in Old Anórien. [65.4S, 18.9W]

It contains the throne of the King of Gondor and a secret room housing a palantír. Although a tower had graced the highest point of Minas Tirith since ancient times, it was rebuilt by Steward Ecthelion I some three centuries before the War of the Ring, and so gained his name.

The Tower stands in the center of the Citadel on the seventh level of the city. In front of the Tower is the Court of the Fountain where the White Tree of Gondor can be found.

The Tower of Ecthelion, also known as the White Tower, was 50 fathoms (300 feet) tall. The plain white standard of the Stewards of Gondor flew from its pinnacle.

There was a chamber high in the Tower and above it in the summit, just under its dome, there was a secret room where the palantír of Minas Anor, the Anor-stone was housed.

The White Tower was first built by King Calimehtar in T.A. 1900 to house the Anor-stone. In T.A. 2698, the Tower was repaired and rebuilt by the Steward Ecthelion I, for whom the Tower came to be named.

[1]After the fall of Sauron, on May 1, the standard of the Stewards of Gondor was raised for the last time. That day Aragorn was crowned King and when he entered the Citadel, the Livery of Elendil bearing the Tree and the Stars was unfurled on the pinnacle of the Tower of Ecthelion.