Threat (also known as "aggro", short for aggression) is the value that describes how dangerous you are to a Creature or Mob. Attacking an enemy will generate threat, as will healing an ally who is being attacked by a enemy (twice the value of healing up to full morale, one time for over-healing). Tanks want to generate lots of threat to prevent enemies from attacking other characters that might not be able to survive the attack. Non-tank classes want to reduce the amount of threat they generate as they damage the mobs or heal their allies.

Several trait lines that are typically used for tanking make your skills generate more threat from damage, namely with a ratio of 3:1 instead of 1:1. These are:

Threat should not be confused with a taunt or forced attack. A taunt skill is used by a tank to force a target to attack the user. It often also provides additional threat: a fixed amount and/or a multiple of the highest aggro the target had that was not from the tank. This way, tanks can grab enemies in the area or immediately pull them off of others. It also allows them to put themselves highest on the threat table and surpass the healer or DPS. (Note: using taunts before a fight has begun copies no threat, it only provides the amount bestowed by the skill.)

Below is an overview of skills and items that increase threat or force enemies to attack the user.

These skills will generate additional threat when used on an enemy, next to the normal threat from damage: 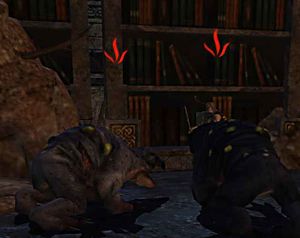 Skills that force an enemy to attack the user