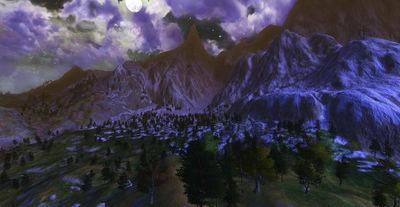 In the eastern reaches of Enedwaith, nestled in the snowy arms of the Misty Mountains, lies Thrór's Coomb, where the people of Thrór, King under the Mountain, temporarily settled after their escape from the Lonely Mountain and the wrath of Smaug the Golden. Abandoned by Thráin and Thorin after the death of Thrór, this vale has become the abode of fell things out of the mountains.

Thrór's Coomb features both solo and small fellowship content, including an instance which pits players against the Draig-lûth in an effort to free the captive Algraig people.

The Grey Company traveled through the area on their journey south.

The entrance to Draigoch's Lair 12 man instance lies up in the foothills of the mountains in the far east.

The Uch-lûth of Lhanuch tell of dwarves that have returned to the halls of Thrór over the long years, though none have seen them in years uncounted. The Draig-lûth have established many encampments here, from which they harry the Algraig peoples, taking captives to sacrifice to the gwiber, the drake-breed which inhabits the harsher steppes of Thrór's Coomb.

For information about NPC's and Services see Harndirion, most of them can be found there.