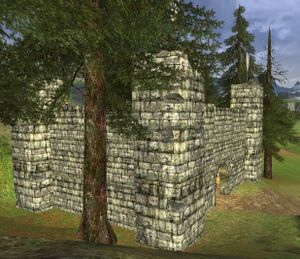 River Outpost under the Standard of the Free Peoples

River Outpost is One of Five Ettenmoors Outposts that are part of Monster Play in Ettenmoors. Control of two of these outposts allows the faction, Creep or Freep, access to the Delving of Frór.

All outposts "begin" under the control of Gaergoth the Unbound’s forces from within the Delving of Frór. These forces will reclaim those outposts every 6 hours after last capture.

When under control of the Army of Angmar, control is obtained by defeating the Tyrant in command and claiming the Standard of Angmar.