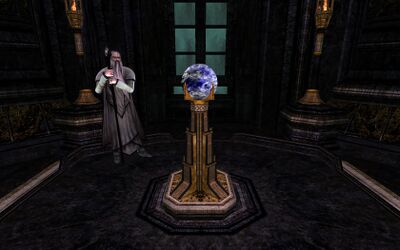 A palantír encountered in-game in Isengard, now in possession of Saruman.

A palantír (pl. palantíri (Quenya for One Who Sees Afar)) is a seeing-stone of great power, made in the dawn of time in Valinor. Some suspect that Fëanor, greatest of all smiths, crafted them, but their origin is lost in time.

The number of palantíri that exist is unknown. The master-stone is known to remain in the tower of Avallónë on Tol Eressëa, the Lonely Isle close to Valinor.

Some palantíri were given to the Dúnedain of Númenor in the Second Age. Of these, seven were brought with Elendil and his sons Isildur and Anárion, as they fled to Middle-earth. Three stones remained in Arnor with Elendil, and four went to Gondor with Isildur.

The palantíri are exceptionally powerful scrying tools. They can be used to see things at great distances, with a few limitations. Whatever is looked upon must have a light source; the stones cannot see anything in darkness. So e.g. one could look deep into the heart of a mountain, but only if someone inside had a torch or other light source.

The palantíri do not project sound, though in theory one can read lips.

Palantíri require a very strong will to operate safely; their use in the books is associated with a lot of confusion and misunderstanding. Saruman, Sauron, and Denethor were all misled by things they saw in their respective palantíri, even though these three had exceptionally strong wills. There is also a suggestion that the palantíri, like some other notable objects of power, may have a tempting or corrupting influence on the unwary; c.f. Pippin's temptation.