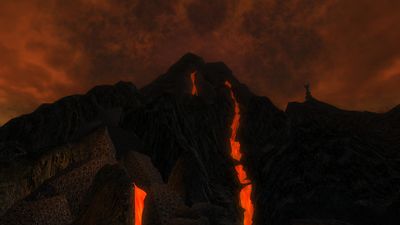 Orodruin (Sindarin for Burning Mountain or Mountain of Fire, literally Mountain of Fiery-red), also known as Mount Doom (Amon Amarth in Sindarin), is an area within the Plateau of Gorgoroth.

This volcano dominates Gorgoroth, and separates Dor Amarth in the north from Talath Úrui in the south. The northern face can be accessed from Dor Amarth. In the south, the mountain's face has blown open, creating the Ghâshghurm.

These landmarks are located within Orodruin: 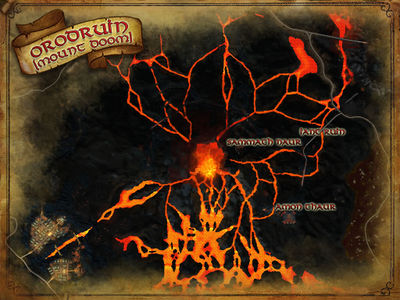 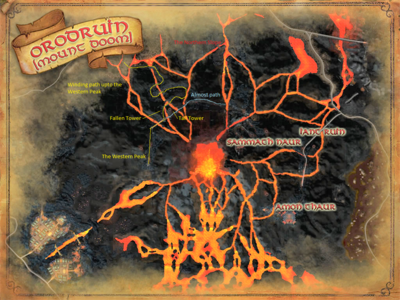 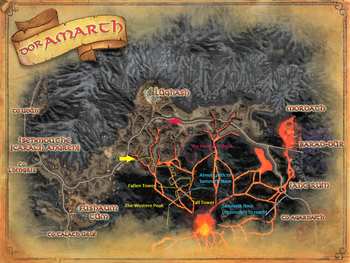 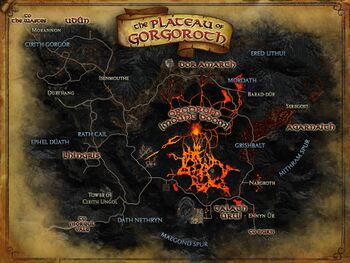 The fire-mountain in the northern parts of Mordor, in which Sauron forged the One Ring during the Second Age, and into which the same Ring fell thousands of years later to bring about the Dark Lord's downfall.

When Sauron chose the land of Mordor as his dwelling-place in the Second Age, Orodruin was the reason for his choice. He used its fire in his magic and his forging, and the most famous result of his forging, and in fact the only one we know of for sure, was the One Ring, made in about the year II 1600. So powerful was the sorcery used in the making of the Ring that it could not be unmade, except by casting it back into the same fire that had forged it.

The first opportunity to destroy the Ring came in the last year of the Second Age, at the end of the War of the Last Alliance. Sauron was defeated in that War, and Isildur cut the Ring from his hand. Elrond and Círdan counselled him to destroy the Ring then [note 1] (the battle had taken place at the gates of Barad-dûr, and Orodruin was therefore near at hand), but Isildur refused, and claimed the Ring for himself. So the doom of the Third Age was made.

Orodruin was far more than a natural volcano - Sauron seems to have extended his own power into it, and was able to control its fires. It seems to have lain dormant when Sauron was away from Mordor, and sprung into life when his power grew. After the Downfall of Númenor, for example, the Exiles in Middle-earth first knew that Sauron had also escaped the Downfall when they saw smoke rising from Orodruin, and an Age later at the Council of Elrond (The Lord of the Rings II 2), Boromir says 'Smoke rises once more from Orodruin that we call Mount Doom'. [1]