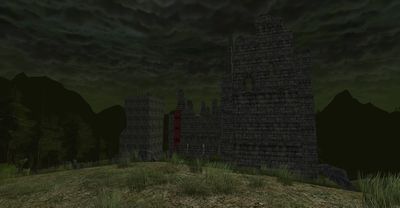 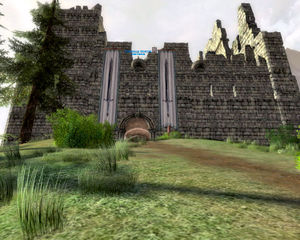 Lugazag (Black Speech for "Lookout-post") is one of the five contested landmarks in the Ettenmoors. A grim shadow is cast by this ruined tower at the foot of the Steps of Gram. From within the walls of this tower, Angmar’s forces send raiding forces into the Ettenmoors in search of food and sport. Because of the proximity of Gramsfoot and Dâr-gazag, Lugazag is usually associated with the Army of Angmar, but may at times fall into the hands of the Free Peoples.

Located on a hill on the eastern edge of the Steps of Gram, Lugazag offers an excellent view into the Hoardale and the lands to the east. The tower has two entrances, one being the main gate facing east, while the other is a backdoor at the north-western corner. This backdoor can be used by anyone to exit Lugazag but only the side currently holding the keep can use the backdoor in the opposite direction.

Entering through the main gate, attackers will have to fight their way through a large hall and up the spiral stairs to the second floor. Directly above the gate, the keep's current commander makes his stand. Another set of stairs leads up to the final room, where the quest NPCs and the backdoor are located. If the oil and iron gathering quests have been turned in ten times, an iron cauldron will be installed above the eastern entrance which does damage to all foes entering the keep here.

Lugazag to the side in control of the tower. This effect grants +20% Infamy/Glory and Commendation gain.

Lugazag will house NPCs and quests associated with the side currently holding the fortress. All quest givers can be defeated by the opposing side, thus making their respective quests unavailable until they respawn.