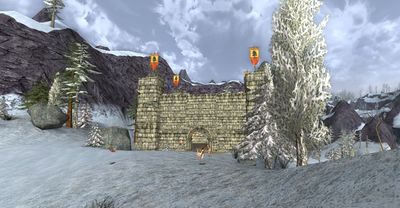 At the border between Arador's End and Hoardale, along the Hoarwell river, lies this Monster Play encampment. This is one of five Ettenmoors Outposts and control of two of these allows the faction, Creep or Freep access to the Delving of Frór.

All outposts "begin" under the control of Gaergoth the Unbound’s forces from within the Delving of Frór. These forces will reclaim those outposts every 6 hours after last capture. These neutral forces will allow players or monster players to capture the location; controlling 2 or more of each of these locations will permit access to the Delving of Frór for your faction. When captured, the location becomes the province of the controlling force for a period of six hours. At the end of this time the outpost is returned to neutral control under the forces of the Rogmul Gaergoth the Unbound.

When neutral this outpost appear under red or no flags and it is "patrolled" by Merrevail types. Control is obtained by defeating the Moss-patch Elder in command and claiming the "Standard of Gaergoth".

When Freeps control this outpost appears under blue trees. Control is obtained by defeating the Captain-General in command and claiming the "Standard of the Free Peoples".

When Creeps (Angmar) control this outpost appears under a red and yellow eye. Control is obtained by defeating the Tyrant in command and claiming the Standard of the Army of Angmar.