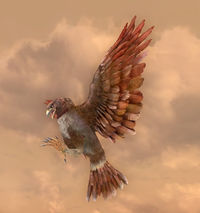 The Eagle becomes available to a Lore-master after choosing the trait Lesser Giant Eagle in the Keeper of Animals tree. It is one level higher than the lore-master itself and is summoned with Eagle-friend.

The eagle is a versatile pet with a good survivability, due to its high level, high morale and self-heal skill. It is especially useful in situations which require crowd-control, since it can fear enemies. Its numerous flanks keeps the morale and power of the Lore-master up and in the worst case, it can revive the Lore-master itself. Its DPS is not too bad either: its auto-attacks deal almost as much damage as those from the Bog-guardian. The eagle has a special ability called "Eye peck": when in combat with a foe, it will sometimes interrupt the enemy's inductions. This makes the eagle useful for specific fights in which the enemy has dangerous abilities, like summoning adds or causing knockbacks. In long group fights (e.g. raids) in which there is a high chance of the Lore-master's pet dying in combat, the eagle can be held on passive to provide the nearby fellows with a higher In-Combat Power Regeneration.

The last three skills on the Eagle's Skill Bar are: