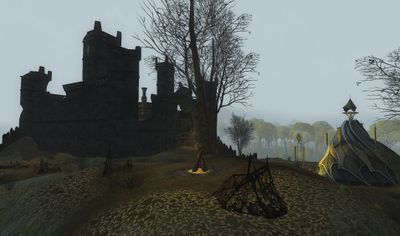 Amon Angened is a hill with a ruined castle that was once a lookout for the Elves of the Greenwood the Great before the coming of the Necromancer, now taken back from the orcs. It is located south of Echad Sirion in Mirkwood. [16.0S, 60.0W]

The following services are found within Amon Angened:

These deeds can be advanced by visiting Amon Angened

The following NPCs can be found within this landmark: During the Hilltop Assault Instance'

Later, after the fort is captured: