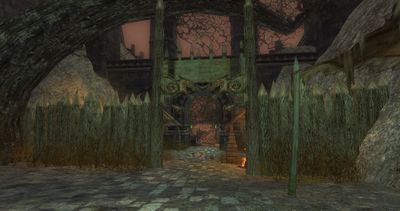 "The Warg-pens of Dol Guldur are where the hounds of the Dark Lord are bred, trained, and kept. Here, goblin-keepers care for the matron of the pack..."

The Warg-pens of Dol Guldur is a World Instance, also referred to as Draugdegil, is located just behind the gate at Fennas Guldur. This is the breeding-ground for the beasts where the Warg-matron Kranklob rests, tending her foul brood in the service of the Dark Lord.

All quests in the Warg-pens are small fellowship quests.

The first part of the pens consists of pulling small groups of wargs (up to three) and killing them. If you want to complete the challenge mode (only available at t2 on current character maximum level), you need one of these wargs to eat a meat slab (because in the end, you need all the slabs to be eaten). Wargs will eat meat when they are 3/4 dead. Eating it will fully heal them and give them a buff for some time. If you need a warg to eat, just lower dps when they are near 3/4 dead and give them some time to run for the slab. Sometimes it is possible to already stand near the slab fighting the warg to make this easier.

After the first 3 groups of wargs you will see a palisade on your left. Kill the groups in there first. You can pull groups of three mobs again, watch the patrolling warg! There are meat slabs in here too. After you have finished the wargs inside the palisade, return to the point before entering it and continue further going downhill. After feeding and killing the wargs, this will eventually bring you to the first boss, Athgrat.

Athgrat will begin the fight with two warg adds. Focus on the adds first: eventually he will wake up the remaining wargs in the room one-by-one. There are no meat slabs in his room so the adds can be killed quickly.

Proceed to move through the door after Athgrat. There are two pulls before the boss remaining, each of two wargs you've seen before and 2 new types. The new ones have an aura which dramatically increases induction times and attack times. The effects can be temporarily dispelled by walking to the fires inside the rooms - don't stand on them, though, since you will receive a fire DoT. These rooms have two slabs each.

After clearing the rooms you will come to the final boss's room (Kranklob). Kranklob hits relatively hard throughout the fight. The warg adds sleeping around the room can be pulled one at a time using a ranged pull. There are 6 warg adds and 5 meat slabs. It's easiest to pull wargs one at a time while someone kites the boss around a pillar. Let the wargs eat the meat for challenge mode and kill them, then move on to the next warg. The wargs can wake up during the fight if you're not doing challenge mode, so it is wise to kill them anyhow. The frost/slow aura is present in this room too, so make sure to use the fires to remove the debuffs periodically.

Once the adds are down, focus on the boss. Although he hits hard, the remainder of the fight is straightforward.

This instance rewards with Medallions of Dol Guldur, 3rd age legendary weapons, relics and settings. If you complete it in hard mode, you will earn more medallions. There are also some items that will drop: