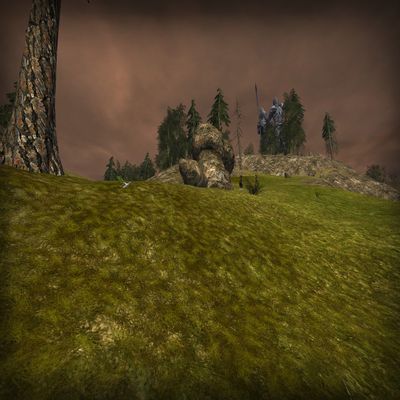 Wailing Hills is an area within the Great River region in Rohan.

Many years have passed since the height of Rohan’s strength along the Great River and Orcs and spiders have returned to the Wailing Hills.

The Wailing Hills are defined by the steep, rocky outcroppings, called tors, which stretch out from the Misty Mountains like long fingers. Statues of Cirion of Gondor and Eorl the Young rise from the earth as ancient symbols of friendship but Orcs, growing bolder, have begun to defile them.

These landmarks are located within the Wailing Hills:

Hundreds of years ago, the forefathers of Rohan destroyed a great Easterling army in the deep valleys of the Wailing Hills to save the forces of Cirion, Steward of Gondor. The name of the land itself comes from the Rohirric word wael meaning “slaughter.”