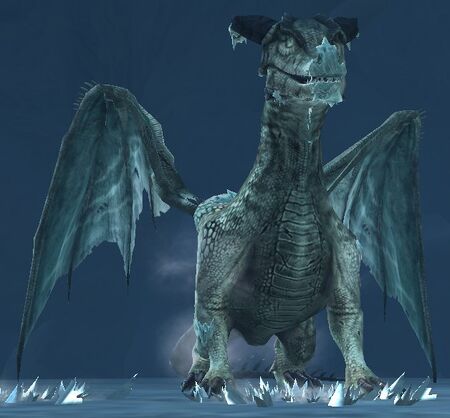 Thrice, in times gone by, the Anvil of Winterstith has opened and I and my horde were unleashed on the world. Now my great glacier is riven once again, so soon after I returned. Who could this be at my threshold? What little, foolhardy mortals would dare disturb my solitude?

This 12 person raid was released in Update 23.2 and is part of the Grey Mountains Instance Cluster.

This is a 12 person raid, max level 120. It is available in the Instance Finder. Estimated completion time is between 60-120 minutes.

Known Deeds for this instance (usually bestowed upon first entrance) include: Click [+] to expand a list of creatures.

These mobs are encountered within The Anvil of Winterstith:

Boss 1: Isvítha the Gluttonous has a couple of issues you need to be aware of. She will reset if you move her too far from the entrance of the cavern. You do not have the entire ice field to work with. She will belly flop to insta-kill anyone under her or blow-back everyone. Karazgar riding Vethúg Wintermind will fly over the battle and spew lines of ice crystals that slow and damage your group, stay away from them. She will cast a Purple eye on a player; Isvitha will focus attacks on them and if she hits that player she gets a buff. She will cast a Blue eye on a player, this player will have a huge AOE frost blast target them. They must run away from the other players so they are not also hit by the blast. About halfway through the fight, adds will start to show up, so have your off-tank taunt them off the healers.

Boss 2: The Thirteen Kings are a brawl. You fight a random 3 of the kings. Each king has a single move.

Boss 3: Karazgar riding Vethúg Wintermind is pretty straight forward until you drop their health a good bit, then there is an icicle mechanic. The boss becomes invulnerable and cant be hurt until an icicle falls and hits it. The icicles are far about the cavern and out of melee reach. You have to shoot them until they break or use another method to make them drop onto the boss. After this Karazgar will start to fight Vethug and they separate so you have to fight both. Keep them apart and they should go down pretty quick.

Boss 4: Hrímil Frost-heart is a massive dragon of the old world. Her major attack is a frost blast intsa-kill AOE. Right before she blasts she will broadcast Let me sow how poweless you really are which stuns all players and then ice will fall from the ceiling. Once un-stunned players must hide behind the ice like its a bunker until she is done blasting everything. Players will get a buff called "Sheltered." In this state, it is protected from breath attacks. There are 3 ice walls every 120 degrees, so you can evacuate to a nearby place.

The battle occurs on a tall platform with cliffs all around. She will broadcast Begone from my sight or Fall and let the glacier take you and then flap her wings tossing everyone. Make sure your right under her feet when she does this or you will get tossed. She gives a debuff called "Vethúg's Revenge", if a player gets 3 of them at once, a Frost attribute DoT will soon target the player (15 seconds later in Tier 1), an ice damage area appears around that player. Once debuffed, move to the outer edge of the stage to keep the damage area away from the fight. She also casts a Blue eye on a player, after a couple of seconds she will target a huge AOE frost blast at them and also sweep her tail to the rear for huge damage. The frost blast will damage in a straight line so any player with the eye needs to move away from other players and everyone needs to stay away from her tail.

At maybe 80% health she will get fed up with the battle and become invulnerable. Players must make their way to the south side of the platform. She next smashes the tall platform to bits. Everyone will safety fall into the water below (don't jump off the platform, you will die). Players must exit the water thru a cavern in the south but fast. She will stalk thru the cavern chasing the players. The cavern path is blocked by Frost Grimms. You must kill them to thaw out the wall and allow you to escape the cavern. Hrímil is slow but she can catch up to you. Players can fight her from a distance, but if she gets to close you will auto-die. There is a big jump near the end and an escape back to the glacier.

Guides for raid T1-3 below.

When your team is running towards the Frost Grimms after the battle with Hrimil, have the LM bane flare the welplings that appear near the ice bridge. Also have the LM put down sticky tar on the bridge to slow down Hrimil's advance towards the team.

If you die (and not revived) on the last phase of Boss 4 while killing the Frost Grimms but your team escapes the cavern, retreat and take the sled that appears which will take you to the location of your fellowship after they escaped.

The raid armour set boxes drop on tier 2 and 3. 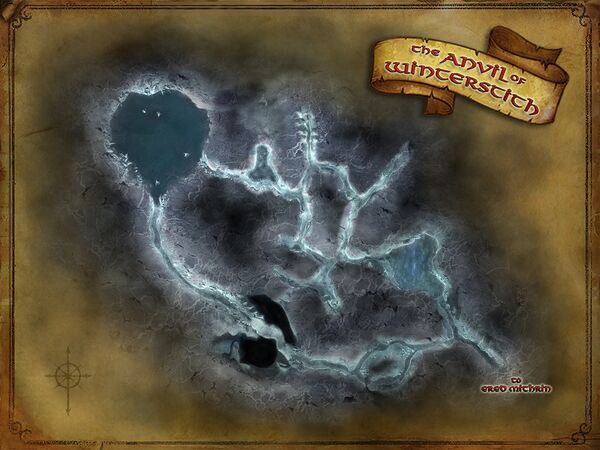