Shelob is the fourth boss of the Remmorchant raid. The guide to kill her can be found on the raid page. 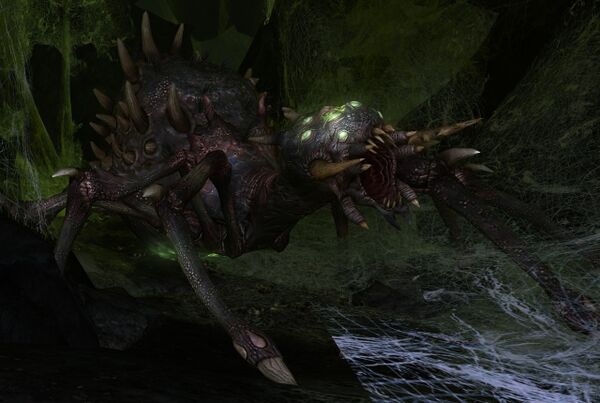 Called by the Elves Ungwetári, Shelob is a great creature of spider-shape, of the spawn of Ungoliant. She haunts the pass of Cirith Ungol from her lair at Torech Ungol, in the Ephel Dúath, the Mountains of Shadow forming the western border of Mordor.

In the Lost Lore of Gorgoroth: Lhingris, Rûkhor the Pale Herald, one of the Gúrzyul, weaves her tale:

“Sauron the Great has granted me His blessing: I... am Gúrzyul! By His blade, I now take the name Rûkhor the Pale Herald!

At my begging, he has shared with me his knowledge of Lhingris, for beneath the towers and Orc-paths is the shadowed spider-haunt, the web-rift, and Ungwetári’s kingdom of filth. Ungwetári, the last child of Ungoliant - this is the name He has chosen for Her, but Her Ladyship has been known by many names, and even He has not learned Her true name. To the Alashi of Mordor, She was Tor-Kralicha. To the Orcs, She was once Takhborkhlob, but now She is known to most by another name: Shelob.

Long before Lord Sauron came to Mordor, and long before the first stone of Barad-dûr was cast, She lived - a creature of evil in the form of spider. Once She dwelt in the Mountains of Terror with the nameless horrors of that lost Age, but when its peaks were drowned, Shelob alone escaped the ruin that consumed the rest of Ungoliant’s children.

When first She fled from Beleriand, Shelob came to the Greenwood. It was there She spawned the first of Her vile children, and together they devoured it from within. In time, She became as Ungoliant, and Her hunger grew insatiable. She spawned numberless spiders and crawling terrors both to serve Her... and to feed Her. It was then She came to the Mountains of Shadow, and upon its dark peaks and within its cavernous depths, She felt a grim familiarity. Thus, it is there She has made her home ever since...

Centuries later, when at last Lord Sauron came to Mordor, He knew at once that something terrible and powerful lurked in the Mountains of Shadow. Lord Sauron soon learned that Shelob dwelt within them, and in His wisdom, He sought Her aid in conquering the Elves and Men of the West. Driven only by Her hunger, Shelob desired neither an alliance nor conquest, and to Lord Sauron’s amusement, She chased Him from Her lair in the mountains. After returning to Barad-dûr, Lord Sauron considered destroying Her, but He soon realised Shelob and Her viciousness might still serve him, wittingly or not...

Indeed, through His wisdom, She became the guardian of the western pass into Mordor. In return, He sent Her His Prisoners and lesser Orcs to feast on. Thus, as Lord Sauron tells it, Shelob became his ’cat’. And so, She kept Mordor free of its foes for many years, all for the price of a few Orkish sacrifices and a supply of curious or unwary travellers. In the year that Lhaereth unleashed the Great Plague, the Orcs of Cirith Ungol sought to expand the great tower’s tunnels, and they foolishly delved into Her lair. In Shelob’s wrath, Her children flooded the passages beneath the tower, killing all they encountered. However, She relented before Her children reached the cellars of Cirith Ungol - a mercy later repaid in sacrifices by Orcs seeking safe passage.

As Lord Sauron reminds me, Shelob serves no whims but Her own. At times, a single Orc can sate Her hunger, but when She desires it, She will devour a company of Orcs and betray their foolish trust in that imagined bargain. Indeed, woe be the day when Shelob’s hunger grows too great, for when at last She comes before Lord Sauron, he shall destroy Her utterly.”

The earliest definite date we have for Shelob is c.1000 (Second Age), because we know that she occupied Cirith Ungol before Sauron began construction of Barad-dûr. Various lines of evidence suggest that she arrived there after fleeing the climactic end to the First Age a thousand years earlier. The suggestion here is that she originally occupied Beleriand, and fled southwards to escape its destruction.

If 'Shelob' were an Elvish name, the 'e' sound would be short, giving a pronunciation something like 'shehlob'. Her name, though, is a compound of two English words, 'She-lob', so we have assumed a standard English pronunciation.

Attercop literally means 'poison-head', and was actually a word used for a variety of poisonous creatures - from atter, we also derive our modern word adder, a type of poisonous snake.
Cob is probably a shortened version of attercop, and survives to modern times in the word cobweb.

These small eight-legged creatures, known for capturing their prey in intricate webs, were evidently as common in Middle-earth as they are today. Characters in The Lord of the Rings often refer to them descriptively, whether it be Gandalf discussing his capture by Saruman, Sam climbing ropes across the Silverlode, or Gollum clambering down a rock wall. There are about twenty thousand different species of spider in the modern world, so presumably there was a similar variety in Middle-earth, too. Most of those described by Tolkien, though, had a supernatural element to their make-up.

There was a more sinister side to the spiders of Middle-earth, though, that entered it with the monstrous Ungoliant in the years before the First Age. A gigantic creature of spider-shape, it was she who destroyed the Two Trees of Valinor, and escaped with Morgoth into the lands of Middle-earth. Though Ungoliant herself disappeared into the far south, she left the northern lands infested with her offspring. During the First Age, the mountains north of Beleriand were infested with these monsters, and became a place of dread.

The most famous of Ungoliant's children, though, lived far to the south and east of the northern mountains, on the borders of the land of Mordor. This was Shelob, who haunted a network of tunnels watching the pass of Cirith Ungol, eking a living on the hapless Orcs of Sauron. She had offspring of her own, too, smaller than she but with a cruel intelligence, that spread throughout the Ephel Dúath and north into Mirkwood. It was creatures like these that Bilbo encountered in The Hobbit, and through fighting them that his sword acquired its name Sting.

The evil creature of spider-form who was Morgoth's accomplice in the destruction of the Two Trees, and who fled with him to Middle-earth. The creatures that infested the Mountains of Terror were her offspring and descendants, as was Shelob who dwelt on the borders of Mordor.

Ungoliant's ultimate fate is unknown, but some sources suggest that in utter starvation she consumed herself.

Ultimately from ungwë liante. 'Gloomweaver' is Tolkien's preferred rendering, but 'Gloom spider' seems to be a more literal translation. In Elvish, 'weaver' and 'spider' are closely related words, and in English too: 'spider', 'spindle' and 'spinner' all share a common ancestry.