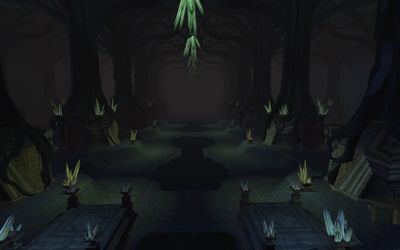 Whether entering from the First Hall in the east by way of the Bridge of Khazad-dûm or the switchback, or coming from Zelem-Melek in the west, travelers to Nud-melek should eventually reach the breathtaking vastness of the Second Hall.

The Second Hall is a vast work of art, demonstrating both the vision and supreme prowess of Moria’s Dwarf-masons. It's enormous.

This ancient chamber dominates Nud-melek, filling the space from the chasm and the First Hall to the western edge of the region. From virtually any corner of this oldest territory of the city, the branching tops of the Second Hall’s colossal columns can be made out, despite smoke and haze. Once seen, the Second Hall cannot be forgotten. 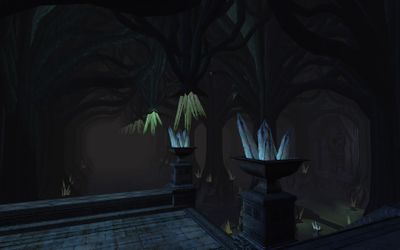 The northern and southern walls of the hall are cut to house a long series of immense statues, each depicting a noble Dwarf-king or craftsman. Down the length of the hall tower the site’s true masterpieces: rows of iron and obsidian pillars formed in the shapes of soaring trees. At their bottom, their wrought roots tangle about massive stone bases. At the top, they branch into perfect arches to support a cathedral-like ceiling. Down the center, hanging from the serpentine branches like fruit, dangle spiny green crystal lamps.

It’s easy to believe that this forest of world-trees holds up the mountain above. Harder to imagine is the ingenuity required to fashion this place from solid rock. The Second Hall is a triumph of craftsmanship and design, one of the great marvels of Moria.

Of course, no space this size could be empty. Abandoned mine-cars litter the ground. Giant cave-claws and tiny dragonets wander the wide floors of the hall near awed Orcs and Goblins. An avenue leading off the hall to the north, via a branching passage known as the Deep Crossroad, is now a row of Orc camps and rubble. Once, this avenue was connected to the Twenty-First Hall by a grand archway, but that path is long since smashed and blocked.

The western end of the Second Hall is taken up completely by a steep and complex staircase, called Khadar-zarâm. This architectural wonder scales the whole height of the chamber and leads to the Great Hall of Durin beyond. Travellers entering the Second Hall from the west arrive at the top of these dizzying stairs, amid the highest branches of the stone forest. [1]