. The Trolls and Rangers are available for one hour, upon an expenditure of Ettenmoors reward items based upon your side of play as follows:

Creeps pay 500 Commendations to play a Troll for 1 hour.

The quantity of player controlled Trolls and Rangers varies depending on the number of keeps and outposts held by the opposing site. Currently, there is a maximum of three session play characters.

Note: The second Troll or Ranger is often referred to as the "Lugazag" (or "Lugz") Troll or Ranger, respectively. This is because of the quest text to get the second Troll or Ranger session started and has nothing to do with who holds Lugazag. Simply put, which ever side holds none of the 5 keeps and not more than one of the Outposts (regardless of which ones they may be), the second quest giver will appear and allow a player to bring forth that second creature type. So a side holding only the River Outpost will have access to 2 of their sides special session creatures to play.

Each session lasts for 1 hour but can be aborted early -- either by logging out of the game or using the option to log out of the session.

When you complete a session, you need to talk with the quest giver to "finish" the session off -- it is considered a quest that must be finished and, upon completion, it will prevent you from playing another session for 11 hours from that character. If you do not speak with the quest giver at the end of your session, you will not have completed the quest so it will prevent you from another session until you do finish it -- either by abandoning the session or by completing it via speaking with the original quest giver. In either case, you will not be able to play another session for 11 hours FROM the completion/abandonment of the quest that began the session. (as in you played a troll yesterday and another is needed today. You go to get a troll and find you did not speak with the quest giver so you "finish" the quest and your 11 hour block begins from THAT time versus when you actually ended the last session you played).

Note: It is possible to play a session, switch to another character and play a session from THAT character... Repeat with as many characters as you have but this has been viewed as an exploit at times and can cause a player problems.

It is considered impolite, and a reportable offense that can lead to your account being suspended, if one begins a session and does not take the creature to the field to fight -- as in beginning a troll session, run the troll to a corner of the zone and park it there to prevent it being used to help the creep side from fighting back. This type of "tactic" has led to extended suspensions of some players accounts and it is recommended that players who see such behavior report it so appropriate measures may be taken to prevent such behavior.

Note: As of Update 18, ranger and troll sessions have not yet been scaled to level 140 but remain at lv100, making them slightly ineffective.

"Rangers are stealth based warriors adept at slaying foes of the Free Peoples quick and silently."

Note: Rangers can join freep fellowships and raids while their session is active.

In order to start a ranger session, players must talk to one of the quest givers in Glân Vraig and pay 500 Commendations to begin a session.

If two or more ranger sessions are available, they can all be played once. The quests are repeatable daily.

"You are a Ranger, dispatched to keep safe the contested borderlands of the Ettenmoors from the Witch King's army. In your many years, you have become skilled with both the bow and the blade. In addition, you know how to move across the land in silence and unseen, allowing you to take your foes by surprise." 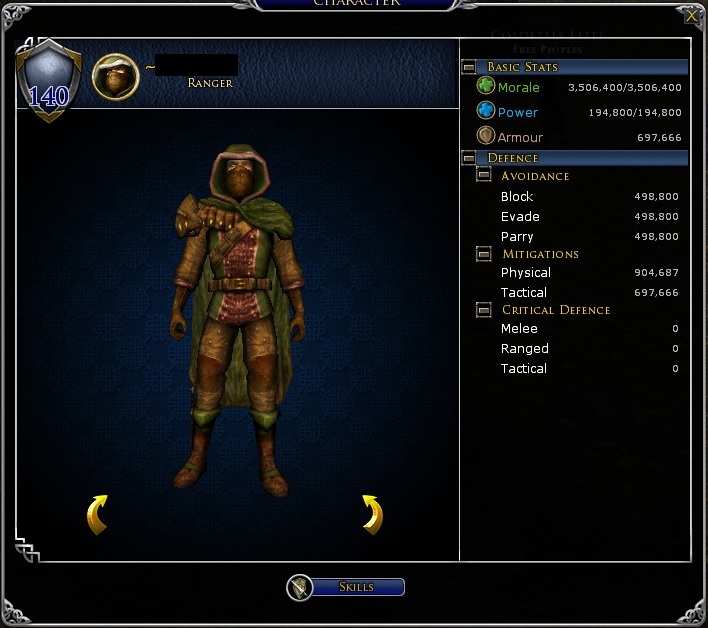