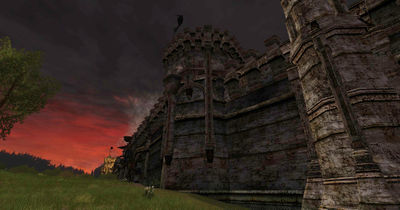 The Rammas Echor is a Defensive wall surrounding the Pelennor Fields in Old Anórien.

Rammas Echor functioned as Minas Tirith's second line of defence, the first being the swift flowing Anduin. It stretches some 10 leagues in a great loop surrounding the Pelennor Fields and forming the outer defensive work around Minas Tirith.

In the south, at its closest point to Minas Tirith (one league distant), it runs from Harlond and the South-gate where the Royal Road (Great North-South Road) approaches the capital from the south; follows along the banks of the River Anduin before curving northward, at its greatest distance from Minas Tirith (four leagues from the Great Gate), toward the eastern-gate and accompanying watch-towers known as the Causeway Forts, which sit along the road to Osgiliath and the banks of the Anduin; continuing then back westward to the North-gate, where the Royal Road enters the Pelennor from the north. 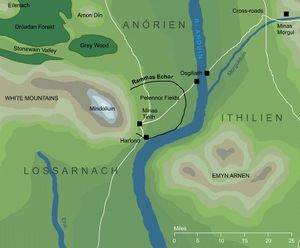 First built after the fall of Minas Ithil, the wall was repaired prior to the War of the Ring by Denethor II, the work being completed only a few days before the Witch-king of Angmar attacked.

When the Witch-king's forces attacked, the Rammas was quickly breached in many places with massive explosions.

Now ever and anon there was a red flash, and slowly through the heavy air dull rumbles could be heard.
"They have taken the wall!" men cried. "They are blasting breaches in it. They are coming!"[1]

Its defenders, too few to hold such a long fortification, were killed or fled back to the city.

Confronted by the Ors who overran Cair Andros and were blocking the Royal Road in the northern fields, the Rohirrim completely circumvented the Rammas on their ride to relieve Gondor by entering the Pelennor Fields to the west through the Stonewain Valley.[2]