The entrance to Northern Ered Luin - what lies beyond the gate?

Northern Ered Luin is a mountainous land north of the in-game Ered Luin in the western reaches of the land of Eriador.

Currently, it is inaccessible in-game, and no mention of its future release has been made. The entrance to Northern Ered Luin lies beyond the Refuge of Edhelion in Thorin's Gate, though access is blocked behind a gate.

In the beginning Ered Luin (Sindarin for "mountains, blue") was an unbroken mountain ridge, a natural border between Eriador and Beleriand. The elves who settled in Lindon named it Ered Lindon. Also dwarves settled here but these settlements were destroyed in the War of Wrath when the mountains were brought apart and river Lhûn broke through them to the Grey Havens, which survived and remained an elven harbour.

Much later Thráin II established himself in northern Ered Luin when he was exiled by Smaug the dragon. Probably many of his righteous folk moved back to the Lonely Mountain (Erebor) when Thorin Oakenshield retook the domain about 77 years ago (Lotro time); that would explain a wake in which much of the decadent happenings now are taking place. 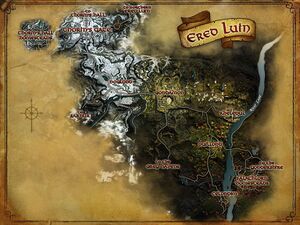