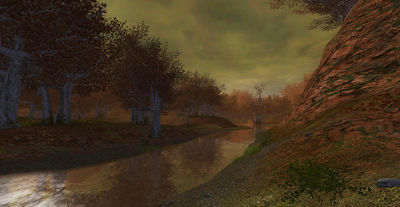 The Mournshaws are a vale of strange and gloomy trees and marshy lands, fraught with mystery in Enedwaith. The Derudh (a term derived from the Welsh word for druid) make frequent pilgrimages to this region dotted with great stone rings to commune with the spirits of the forest. The Grey Company travelled through the area on their journey south. The Mournshaws feature several instance quests revolving around the Wild Huntsman and the Lords of the Forest.

The Mournshaws are a forest haunted by the savage Cun Annun and great Wood-trolls, but also by the ghostly Elhudan. These wild fell spirits seem outwardly not unlike the limrafn of Evendim, but they are far more dangerous. Few mortals have ever seen the Lords of the Forest in their natural forms, and even fewer have laid eyes upon the Wild Huntsman and survived... what these high beings are remains somewhat of a mystery, though the Rangers believe that they may have once been servants of Oromë the Hunter.