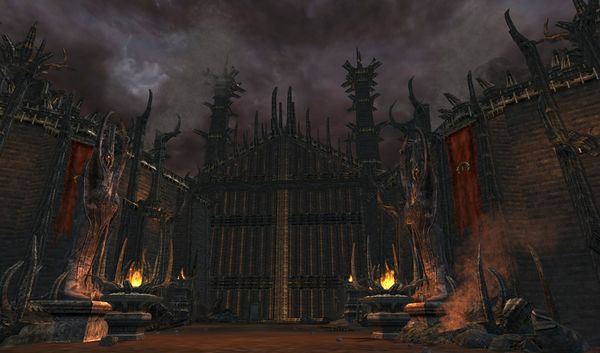 The Morannon (Sindarin for Black Gate) is a landmark in Cirith Gorgor at the edge of the Plateau of Gorgoroth region.

This impregnable gate prevents traversing the Haunted Pass between Gorgoroth and the Wastes, and is the most fortified and direct entrance into the land of Mordor. Beyond the gate is the vale of Udûn, where Sauron has his foundries and parade grounds. Lying before the gate are the Slag-hills, where the refuse of Udûn is piled.

The massive Morannon was built by Sauron, the Dark Lord of Mordor, when he first occupied Mordor in the Second Age, to prevent invasion through the Pass of Cirith Gorgor. Like Barad-dûr, it was built with the power of the One Ring.

The Black Gate is set in an impregnable black stone and iron wall. The wall has been estimated to be 60 feet high and 250 feet long, with each half of the great gate being 90 feet wide, and set on large stone wheels. Behind the gate are gigantic circular stone ramparts, and when the gate needed to be opened, two pairs of Mountain-trolls who were tethered to gigantic beams pushed their way around their rampart's track, gradually levering open the gate and allowing for the incoming or outgoing of Mordor's armies.

Set behind the gate are myriads of archers, spearmen, bowmen, and hundreds of thousands of Orc troops ready to defend Mordor.

After Sauron's fall at the end of the Second Age in the Last Alliance of Elves and Men, the Towers of the Teeth were built by the Gondorian victors. Backed up on the other side of Udûn by the Isenmouthe (Carach Angren), and protected by the castle of Durthang on the west side of Udûn, the Black Gate was redesigned to keep all of Mordor's evil inside, shielding the outside from it - and it from the outside. The reconstruction of Minas Ithil, Tower of the Rising Moon, as well as the construction of Cirith Ungol were also done for the same purpose.

During the War of the Ring, the Army of the West, numbering some 7,000 men, arrives at the Black Gate with the intention of drawing the Eye of Sauron away from Mount Doom, to allow Frodo the Ringbearer to cast the One Ring into the Crack of Doom within it. This they achieve, and the Ring is destroyed in the fires of Orodruin, following which the Black Gate, the Towers of the Teeth, and Barad-dûr immediately collapse.