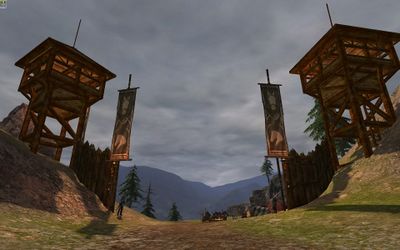 The Limlight Gatehouse is a landmark within Limlight Gorge in the Great River. [25.5S, 67.1W]

Captain Agelbrit stands guard at a lonely gatehouse on the upper edge of the Limlight Gorge. His duty is as much to keep unwary travellers out of the Gorge as it is to keep the beasts within from climbing out to threaten the folk of Stangard.