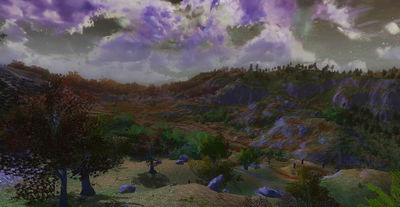 The Lich Bluffs is an area in the south of Enedwaith. This grim place is a great burial ground, not unlike the Barrow-downs of Bree-land, where many Dunlending and Algraig clansmen were interred long ago. It is even rumoured that some men out of the White Mountains found their way into Enedwaith after the wars between Sauron and the Last Alliance of Men and Elves, though they died off long ago. Monuments and barrows of Dunlending origin dot the landscape, a great field of the Dead awaiting the hand of a necromancer.

There are three instance quests in the Lich Bluffs, two of which deal with the tragic story of the Oathbreakers who dwell here, and a third that brings forth a previously unrevealed member of an ancient order intent upon raising his terrible army. 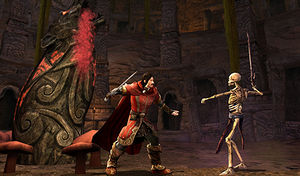 The Lich Bluffs were once a place of great reverence to the Dunlending peoples, but recently a shadow has fallen upon the barrows. Cun Annun haunt the landscape, and wights rise from their barrows. It is even rumoured that a great evil has entered one of the deepest barrows and is raising an army of wights to the service of the Enemy. In one part of the dark ruins, Oathbreakers dwell. The Ranger Mincham, having long dwelt in the shadow of Oathbreaker-haunted ruins, makes his camp here, seeking to learn the truth behind the supernatural events of the Lich Bluffs.

Weaken the Grip of Darkness chain

Father of Our Lament chain