The Instance Join panel aka "Instance Finder" is an in-game tool used to find others who are looking to play a particular instance. First introduced in Update 5, its functionality was expanded in Update 6, Update 18 and Update 24.

Please see the two Developer Diaries above for detailed information about the Instance Finder.

For an explanation of the different types of Instances and a list, see Instances:

Note: LFF is local to a particular region; World is global to the entire server.

Keep in mind that most instances require a certain set of skills for successful completion. This is especially true for 6-man and larger instances. Similarly, there is a tendency for many players to select certain roles, especially DPS. Consequently, there is frequently a mismatch between the roles needed for an instance and those individuals advertising their desire to participate as a particular class. 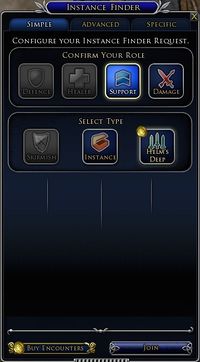 Instance Finder is a tool for quickly finding and playing instances and skirmishes. On the Simple Tab, choose your preferences and Instance Finder will work in the background, allowing you to continue playing while it searches. When a match is found, you will be informed of the group's makeup and then teleported into the instance it found.

The preference you may set are as follows;

Role: Instance Finder will attempt to create groups that have a good mix of the different player roles. Select the role you are willing to fulfil in a fellowship.
Type: There are four categories of encounters Instance Finder can match you into: Skirmishes, Instances, Erebor and the Battle of Helm's Deep. Skirmishes consist of all Skirmishes you have access to. Instances consist of all the scaled Classic Instances you have access to. Erebor consists of the most current instance cluster, where you will find the most potent rewards.

Remember, the more options you select the better chance Instance finder will be able to find you a group! 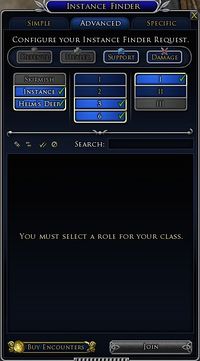 The Advanced tab of Instance Finder has all the functionality of the Simple Tab, with the additional ability to opt in or out of specific instances. Choosing Type, Size and Tier configurations up top will populate the list of instances below. Within that list, click on the instances you are willing to play then press join. Instance Finder will search only for the instances you've indicated. 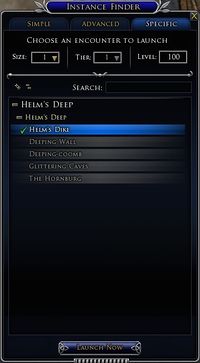 The Specific tab as seen by a Level 14 character

The Specific Tab of Instance Finder allows you to enter instances from anywhere in the game. Navigate the window below to find the instance you wish to play, then configure it with Size, Tier and Level as applicable. Press Launch Now when you are satisfied and you're off! Fellowship members will receive a travel invitation to follow their leader into the selected instance.

Size: Most Instances have only one viable group size, this option is used primarily for Skirmishes.
Tier: Choose the difficulty tier you wish to play on. All instances may be played at tier 1, some have the tier 2 option as well. Only Skirmishes have tier 3.
Level: Indicate the level you wish the instance to be scaled to. All instances have a minimum level. Rewards will be scaled to the level of the instance.

Each instance can be run daily at level 100-139 and at level 140. The instance must be run no more than eight levels below or above the level of your character to obtain the featured instance quest (i.e. the mobs in the instance must not be grey or purple). Moreover, the featured instance level cap quest only bestows on tier 2.
Completing the featured instance quests will award extra rewards for completing the listed instance, in addition to the regular loot from the instance chests, resetting daily at 3:00 a.m. server time. The quests can additionally be reset with Mithril Coin, as well. The quest reward from a level 100-139 run is a Grey Box of Ancient Spoils. For a 140 run, the quest reward is a <Colour> Box of Ancient Treasures, with the colour depending on the instance. These boxes contain similar loot as the grey box.

Initially the challenge chests for any of the instances regardless of the current featured one, had a chance to also drop one or a few pieces of equipment from the featured instance set or jewellery. They were completely randomly rewarded out of the entire sets and not restricted to the classes that were actually in the group. This drop chance was removed in U18.2.

A complete description of the Featured Instance mechanic is contained in an April 2016 Dev Diary by "EdgeCase."

The Featured Instance rotation follows a six-week roster. The weekly instance changes on Monday at 10:00 a.m. server time, and the quests reset daily at 3:00 a.m. server time. On Monday it is possible to do the daily quests twice without using Mithril Coin to reset them: once after the daily reset time but before weekly rotation time, and again after the instance changes.

This is the roster of instances featured as of Update 32, and the daily box they reward at 140:

50 Virtue Experience and a

Embers of Enchantment, a Newfound Coin a coloured Box of Ancient Treasures.

Both the grey and coloured boxes may contain the following items:
It always contains:

It may frequently drop:

It may sometimes drop:

It may rarely drop:

The coloured boxes additionally have a 25% chance to drop an armour piece of the Remembered Rivals set.

Note that for each slot its armour piece can be obtained from two instances.