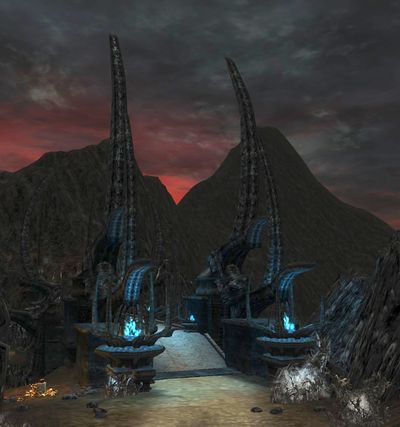 Iant Angos (Sindarin for Bridge of Horror) is point of interest within Lhingris in the Plateau of Gorgoroth. [61.6S, 10.5E]

This great bridge spans a trough between the inner slopes of the Ephel Dúath and the Morgai, connecting Lhingris to Talath Úrui in the east. To the south, water flows out of this gorge down into the swamp of Dath Nethryn. Under the north-eastern corner of the bridge is a ledge which leads to Rath Cail to the north-west.

Frodo Baggins and Samwise Gamgee crossed this bridge after escaping Cirith Ungol. The alarm was sounded at the Tower, however, and they were forced to jump over the edge to avoid an enemy troop coming up the pass from Talath Úrui. Fortunately, the eastern end of the bridge was no more than a dozen feet above the ground. To their surprise, their fall was cushioned by thorny bushes.[1]