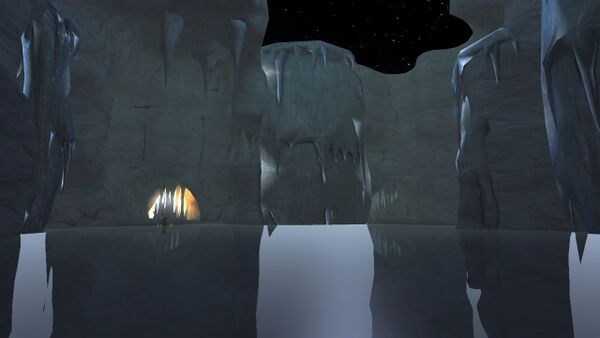 This cave is located at an unknown location within Talvi-mûri. The cave consists of icy passages and frozen waterfalls and deeper within are hot-springs located. The cave is occupied by Angmarim under the command of Mordrambor who are searching for the lesser ring Narchuil.

Characters are brought here during an Epic quest instance. Notice that the hot-springs both for good and bad, standing near them for a short period bestows the good Hot Spring effect, but staying too long will apply the Overheating effect that is causing fire damage.

"Yrjänä revealed the location of a cave where Aearil, the captain of the Elf-ship Thoroval, had long ago taken refuge. The Lossoth seer, Saija, guides the heroes from the South in search of Narchuil...." — Instance text