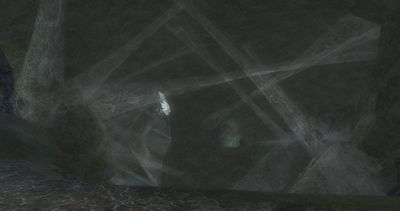 Gorogrod is a large cave complex found in the North of the Scuttledells in Mirkwood [8.8S, 51.2W]

The cave is a deep and evil den of the spiders of the Scuttledells, filled with perilous snares and sticky webs. Even the most seasoned traveller should be wary before treading here, for spiders are among the most deadly foes in Middle-earth. The spiders of Mirkwood's broods are certainly no exception.

There are two entrances, on ether side of the central plateau.

These deeds can be advanced by visiting Gorogrod

In addition several Orcs appear during the quest instance A Cornered Foe: