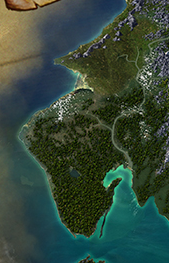 Forlindon is the northern part of Lindon, lying west of Ered Luin in the westernmost part of Eriador. Currently, it is inaccessible in-game, and no mention of its future release has been made.

Forlindon is the northern half of Lindon, the southern half being Harlindon, lying across the Gulf of Lune.

Forlindon was traversed by a river which ended on the northern shore of the Gulf; the haven of Forlond was built there, on its mouths. Off its north-western coasts stood the island of Himring.