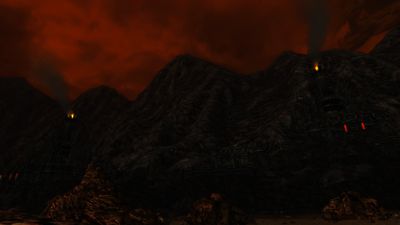 The Ered Lithui (Sindarin for Ashen Mountains) are a point of interest within Dor Amarth on the Plateau of Gorgoroth. [43.8S, 20.2E]

Though only this part of the Ered Lithui is labelled as such, this mountain range actually forms the entire northern border of Mordor, and extends to Udûn and the Wastes to the west and Agarnaith and the Mokál Rukh to the east.

Meeting with the Ephel Dúath in the north-west corner of Mordor it forms one side of the pass of Cirith Gorgor leading into the enclosed plain of Udûn.
A spur forms one side of the pass of the Isenmouthe (also called Carach Angren) which encircles the valley of Udûn.
A second spur of the Ered Lithui leads to the Plateau of Gorgoroth where Orodruin (Mount Doom) and Barad-dûr are located.