From Lotro-Wiki.com
(Redirected from Dimrill Dale)
Jump to navigation Jump to search 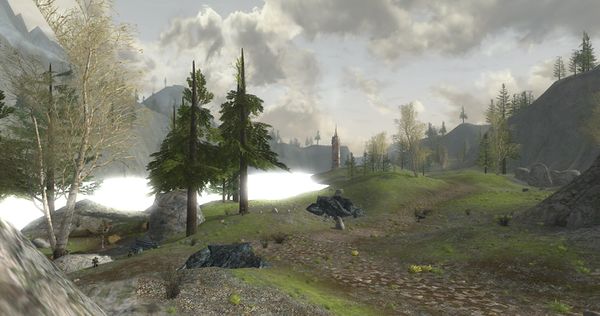 This valley is known as the Dimrill Dale in the speech of Men and Azanulbizar to the Dwarves. The valley is also seen in Azanulbizar, T.A. 2799.

These landmarks are located within Nanduhirion:

This valley is konwn as the Dimrill Dale in the speech of Men and Azanulbizar to the Dwarves.

It is located directly outside the Eastern Gate to Moria at the foot of the mighty Redhorn, Silvertine, and Cloudyhead peaks on the eastern side of the Misty Mountains.

At the head of the vale is the Mirrormere, known to the Dwarves as Kheled-zâram. It is a lake sacred to the Dwarves of Durin's folk. A crystal clear lake in which Durin the Deathless saw stars during the day, which led him to found Khazad-dûm - Moria.

The Silverlode (the Celebrant in Sindarin) begins its journey here, cascading down from the snow covered peaks forming the Dimril Stair, a series of waterfalls, before running through this vale to Lórien on its way to join the Anduin.

Nanduhirion as it is known in Sindarin, lies in the northwestern portion of Lothlórien. Beginning at the Eastern Gate of Moria, one first encounters the dwarf and elf camp Mekhem-bizru [11.5S, 78.4W] at the western end of the valley and Echad Andestel [14.2S, 73.1W] at the eastern end. Orcs from Moria have established camps throughout the valley and a bloody battle was fought here in T.A. 2799 between Dwarves and the Orcs of Moria, in which the latter were defeated and their leader Azog killed. In T.A. 2989 Balin and his followers fought the orcs here on the way to the Mines of Moria.

Thirty years later, the Fellowship of the Ring encamped there having escaped from Moria, after the loss of Gandalf.

The lower reaches of Nanduhirion 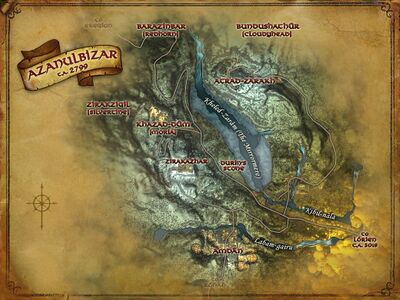