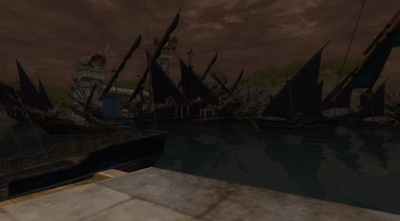 The Corsair Blockade is a landmark in Pelargir in Central Gondor. [85.1S, 31.9W]

The Corsair fleet assaulted the harbor of Pelargir, overrunning it with dozens of warships. When the city was retaken, many of the Umbaran ships were left destroyed or abandoned but many still remain and present a threat to the city as they refuse to leave the sea gates.

(before A Wary Extraction)