From Lotro-Wiki.com
(Redirected from Causeway Forts)
Jump to navigation Jump to search 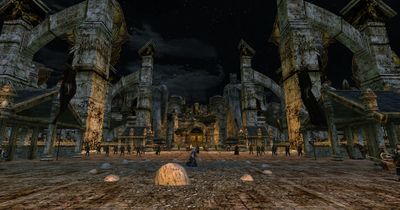 The Causeway Forts are a settlement located beyond the western gate of Osgiliath (during the Sundering of Osgiliath) [61.7N, 86.1W]

This is a primary stronghold that cannot be attacked by the Army of Mordor Monster Players (Creeps).

This settlement provides visitors with many vendors, barterers, and class specific traders for items specific to PvMP. Defeated players from the Battle of Osgiliath will always retreat there if they succumb to their injuries.

The Causeway Forts run from the western gate of Osgiliath to the front gate of the Rammas Echor, the great wall surrounding the fields of Pelennor and Minas Tirith. It is held by Gondor's captains, Boromir and Faramir.

The following services can be found within the settlement of the Causeway Forts:

The following NPCs offer armour sets with Essence slots as well as armour sets that scale up to 9 levels alongside the player.

All items are Bind on Acquire (BoA) and most items are usable only in PvMP (Monster Play) but the traders will talk (and barter) with anyone, so be careful. All items are restricted to class and level (Rank), however, the "Runics" (Relics) can apparently be acquired by anyone, and processed by a Relic-master.

The Causeway Forts (after) 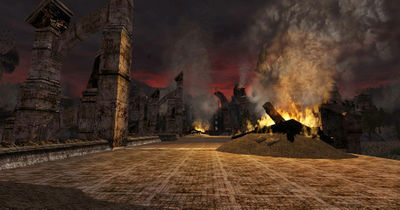 After the Fall of Osgiliath, the Causeway Forts are defended by Faramir and his men, against the overwhelming numbers of the Morgul-host, but are finally forced to retreat to Minas Tirith. The besieging orcs then lay the forts to utter ruin as they march from Osgiliath towards Pelennor Fields. [63.0S, 12.7W]