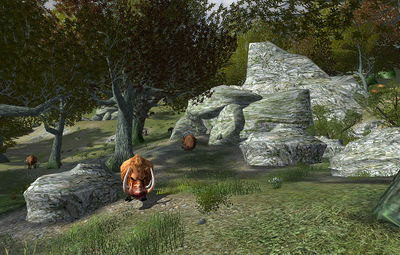 Leaving Galtrev's southern gate, the road quickly ends at a cliff-side intersection which looks down on a fair-sized lake with a marshy shore. Even from atop the cliff, several large boars can be seen wallowing in the lake, with more of their brethren roaming the forested glade behind the lake. Were it not for the presence of the boars the lake might be a charming place to rest. But despite the idyllic appearance, it is said that a much larger and aggressive boar — the sire of the boars wandering about — is believed to live somewhere close.