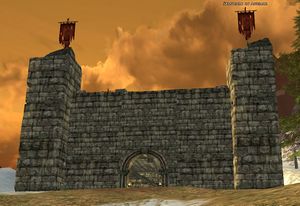 Arador's End Outpost under the Standard of Angmar

Arador's End Outpost is One of Five Ettenmoors Outposts that are part of Monster Play in Ettenmoors. Control of two of these outposts allows the faction, Creep or Freep, access to the Delving of Frór.

All outposts "begin" under the control of the Rogmul, Gaergoth the Unbound’s forces from within the Delving of Frór. These forces will reclaim those outposts every 6 hours after last capture.

These neutral forces will allow players or monster players to capture the location; controlling 2 or more of each of these locations will permit access to the Delving of Frór for your faction. When captured, the location becomes the province of the controlling force for a period of six hours. At the end of this time the outpost is returned to neutral control under the forces of the Rogmul, Gaergoth the Unbound .