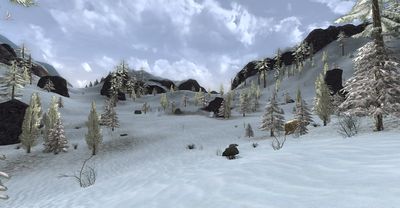 Located on a spur of the Misty Mountains, Arador's End is the high, freezing location above the green plains of Ettenmoors. Although directly behind it lies the wastes of Angmar, Arador's End itself is largely uncorrupted, however, it contains a mass of trolls, drakes and fell bears, as well as settlements of goblins.

Arador's End contains the Isendeep Mine, heavily contested by both sides, the mine a prime source of highly desired Isendeep ore. Defence is entrusted to Tyrant Bûrzgoth for the Creeps, and Captain-General Meldún for the Freeps.

Though Aragorn’s grandfather was taken by Hill-trolls in the Coldfells, the beasts dragged him back to their camp nestled in the bosom of the Misty Mountains. The lands to the north (The Troll-height), stretching along the shelf of the Misty Mountains, have been called Arador's End ever since. This event is revisited during the session play instance: The House of Isildur.