The Lord of the Rings Online: Mines of Moria 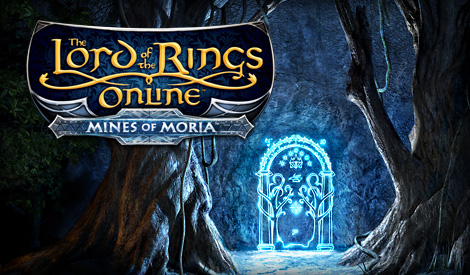 The Lord of the Rings Online: Mines of Moria is LOTRO's first expansion. With this expansion, players could for the first time venture beyond Eriador, crossing the Misty Mountains in the footsteps of The Fellowship of the Ring. The expansion was originally sold in DVD boxes in game stores.

This page aims to give an overview of the release history and the main features of the expansion. A full overview of all game changes can be read in Mines of Moria's release notes.[1]

The Rune-keeper is a master of words, and uses those to either damage his enemies or inspire his allies.[2]
The Warden is a more "tank-y" class and is a master of martial combat, and must strike his blows in such a way to best finish off his enemies.[3]

March 14, 2008, Codemasters officially announced the development of Mines of Moria at Codemasters Online Connect 2008.[4][5] It was scheduled to release in the fall of 2008.

The expansion was promoted through web-based mini games. Playing these games unlocked the trailer and game art.

Mines of Moria was originally sold in three versions: a base version called the Complete Edition, a Special Edition with some extra goodies and the most expensive one, the Collector's Edition. The original boxes can sometimes still be found online on retailer websites. Note, however, that the product keys of the EU version (recognizable by the Codemasters label) do no longer work due to changes in ownership of the game.[9] 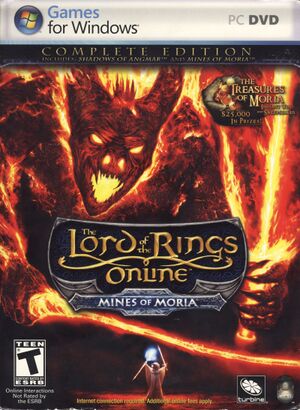 * The coins automatically appear in the inventory of every character upon using the attached key. Right-clicking them begins the quest Ithildín Coin with unique selectable rewards.
** This product key still works: it bestows the in-game items and title retroactively, as long as the code originates from an American order. Codemaster (EU) pre-order product keys do no longer work.
*** The soundtrack was officially released on November 17, 2008. The album was largely the same as the earlier released Shadows of Angmar soundtrack, but with seven bonus tracks added onto the end, including one from the Mines of Moria expansion.

Players who tested the expansion in Beta received a Ranger's Cloak. Mines of Moria was released in Europe on November 14 and in Northern America on November 18, 2008.