The Bridge of Khazad-dûm 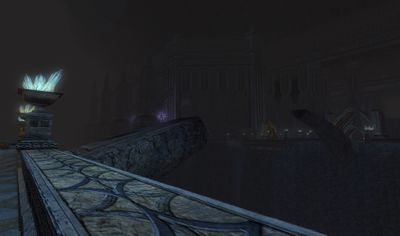 The Bridge of Khâzad-dûm is located in the center of Nud-melek (if you look at the map you will see a deep ravine with a broken bridge in the center) [8.0S, 99.1W]

Once a key defensive feature of Khazad-dûm’s eastern border, the Bridge of Khazad-dûm’s graceful arch is now broken. Travellers, unable to cross Moria’s gaping eastern crack, must now circumvent it.

Knowing from the earliest days that the wealth and grandeur of Khazad-dûm would attract pillagers and enemies of all sorts, Durin’s folk built the halls just inside the East-gate for defense. A deep gash in the earth crosses this region, and the ancient Dwarves, treating that chasm as a kind of natural moat, erected a defensible course across that gap: the Bridge of Khazad-dûm

The Bridge was narrow, to limit an enemy’s numbers. It stood near the center of the great chasm, to afford maximum sightlines for defending archers. It had no railings or adornments, to force a slow and uneasy crossing. For thousands of years it arched, delicate and foreboding, across that deep cut, linking the easternmost First Hall with the vast Second Hall to the west. Now that thread has been cut.

The Bridge of Khazad-dûm stands broken, a section of it fallen away into the fathomless shadows of the chasm it once crossed. The gap—dark and deep and perhaps the source of Moria’s name, the Black Pit—seems much wider now without it.

Travellers reaching the broken span might see it as a monument to Moria’s lonely removal from the sunlit world beyond, a symbol of its long separation from the rest of Middle-earth. From the east, it makes Moria seem one dramatic step farther away. From the west, bound for the East-gate and the open air beyond, it transforms Moria into something inescapable.

But there is hope. That pit can no longer be crossed, but it can be circumvented. Follow the edge of the chasm to the north, beneath the flying buttresses and crystal lamps, to where a passage has been dug through the natural rock at the top of a steep path. There, a switchback trail on the cliff face lets travelers bypass the chasm.

Beware, though, as that pass is much-used by Orc-kind, who can now be found on both sides of the chasm. What’s more, the cave mouth there leads north out of Nud-melek and into a stretch of Durin's Way that the bat-winged Merrevail now claim as nesting grounds. Still, this is the only exit out of Nud-melek to the north. [1]