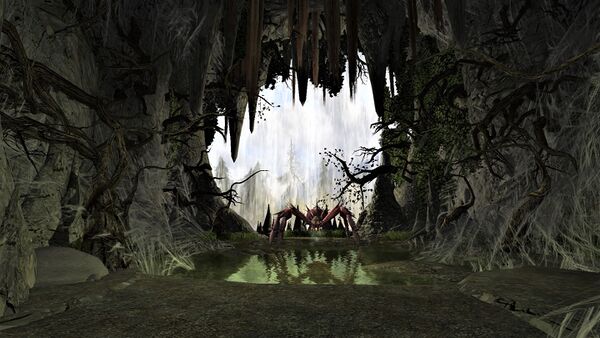 The Roots of Fangorn is a level 75, 6-man world instance located in Limlight Gorge[29.0S, 72.0W] across a log bridge and up a hill; deep in the Southwest corner of the region. It was introduced about a year after the Rise of Isengard expansion and continues the saga South to Rohan.

Characters who have completed the deed Discovery: Roots of Fangorn and visited the cave entrance are allowed to enter.

The following deeds are involved with this location:

At the entrance there is a bridge followed by the first pull, the trash pulls leading up to boss are the hardest in the instance. The first trash pull contains: 3 orc shamans (17k each) and 2 orc reavers (32k each). The reavers stun and do mild damage. A Lore-master should keep stun immunity on the main tank. The defilers put bad DoT effects on the party and should be burned down first. The second pull is identical. You then reach a troll that you do not need to kill, but it counts towards reputation quests and Great River deeds.

This boss is maybe harder than the second boss, mainly because it has a lot going on and groups often become overwhelmed. Frûshkul has 379k Morale does mild damage, and occasionally does high damage AoE. When you walk in there will be one shaman and one reaver. Take them out before DPS-ing the boss.

Frûshkul will occasionally yell "I'll chop you to bits!" When he does, everyone (including the tank) should back away from him because he will do a powerful AoE damage attack. Moving off quickly may interrupt him. When Frûshkul calls, "I'll throw you in the dirt", have somebody quickly disrupt him as he charges up a massive attack on the tank. Every 20k-ish Frûshkul will say, "Get in here you runt!", and then a goblin runner will come in, trying to get to the door. You must kill it before it gets out or else it will summon a wave of adds. When Frûshkul says, "Get in here you foolish shamans!", two orc shamans and one reaver will come. When Frûshkul reaches 50k he gets a +100% damage buff. Once you beat him, make sure everyone loots the chest.

Once you beat Frûshkul a door opens up behind him that leads into a spider nest. The first room has one large spider that does not do much damage, but who summons adds that do mild damage and nothing else. Room two is the same. However, Venomous Spiderlings are introduced here which have 3k Morale. They should be burned down quickly because their DoT are basically lethal since it ticks for 5k each tick. The third room has two large spiders in addition to Venomous Spiderlings.

Gurthúl is easier than boss one if you have good ranged DPS. The tank should turn her around because she does bad frontal AoE. Gurthúl will shoot out 500-ish damage dark green poisons at random, these will stack over time and you cannot pot these (see note below). About 20k in, Venomous Spiderlings begin to spawn at the door, and later they spawn (3 at once) in the center, at the waterfall, and at the door.

Note: About every 30 seconds, a system message reads, "One of the roots attempts to cure your poison."
There are 6 Forest Roots in the room (3 on each side) which generate temporary poison-clearing hotspots around themselves, glowing green. In T1, any number of characters may enter the DoT-removing rings; in T2 this is limited to only one character ... thus, have someone decide and call out that one person who quickly runs for the DoT-removal.