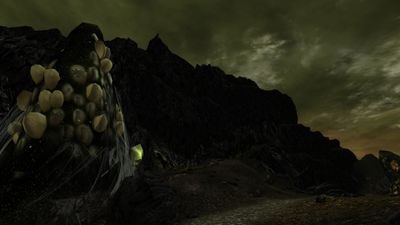 The Morgai (Sindarin for Black Fence) is a point of interest within Lhingris in the Plateau of Gorgoroth. [55.0S, 7.8E]

This dark, jagged stone ridge forms the eastern border of Lhingris, dividing it from Dor Amarth and Talath Úrui. It runs parallel to the Ephel Dúath -- north-west and south-east, and for much of its length remains near to the eastern slopes and foothills of the Ephel Dúath, forming the pass of Rath Cail in between. The discovery location is an Orc encampment atop the ridge, which can be accessed east of the main road. [55.6S, 7.0E]

South of Iant Angos, the Morgai and the Ephel Dúath diverge, and the gorge opens up onto Dath Nethryn, which has recently been swamped. Beyond Dath Nethryn, the Morgai connects to the Maegond Spur at the southern end of Gorgoroth. Dâr Mauzur, a large enemy camp in Talath Úrui, covers much of the land on the eastern side of the Morgai.

As a location involved in Allegiance Quests, the Morgai has 100 Shadow of Mordor and is guarded by level 115 creatures. In this case, the local enemies are Mordor Trackers.

After their escape from Cirith Ungol, Frodo Baggins and Samwise Gamgee travelled through the deep ravine between the Morgai and the Ephel Dúath to reach Rath Cail. Further up the road, they turned eastward and found a place where they could climb up the Morgai and look out onto the plain of Gorgoroth through a gap. There was no way to climb down the eastern face, nor to traverse the ridge, so they climbed back down the way they came and continued to travel north alongside the Morgai.[1] This accessible part of the ridge must now be the location of the Orc encampment.