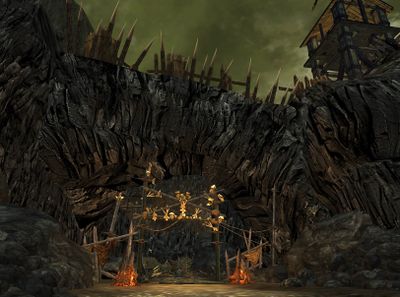 Kála-murg (Black Speech for Drear Stronghold or Grey Stronghold) is a point of interest within Lhingris in the Plateau of Gorgoroth. [53.8S, 5.0E]

This Orc-hold has apparently become a feeding ground for the spiders of Lhingris. The Orcs still hold most of the encampment, but the northern part has been overrun by the spiders.

There is a small interior space, the Orc-hold Caverns, in which dwells the leader of the encampment. [53.5S, 5.0E]

Kála-murg is the main encampment of the Orc-trackers in Lhingris. [1] It is now one of the sites of the struggle between Shelob's broods and the Orcs of Mordor. Glupronk is in command of the encampment.[2] Kála-murg continues to be battered by Ungol forces for some time, and later Dulgan appears to be in charge.[3]