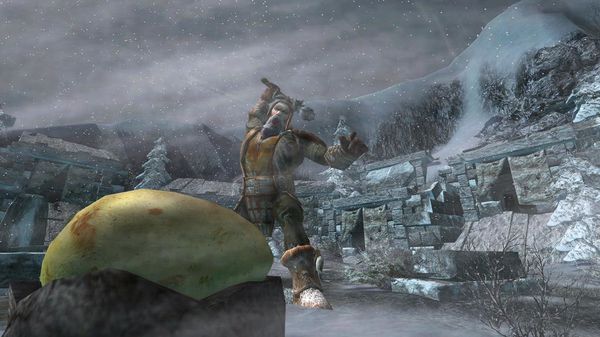 Iorbar's Peak is a 3-man instance taking place atop Iorbar, in the Misty Mountains.

"A stone-giant dwelling upon Iorbar's Peak has taken an egg from the eyries of the Great Eagles. Gwaihir the Windlord has requested that you brave the storms of the mountain and safely secure the egg before it becomes the giant's next meal." 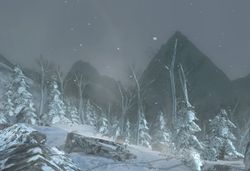 As you enter the instance, you see some signature dour-hand dwarves having a conversation about the uses of giants, and so forth. Once they are done with their conversation, they will attack you. After these dwarves, there is a turn in the road, but both paths meet up again shortly there after. The left path with ice leads to a group of normal Loyal white Sabre-cats (about 4), and their respective keeper. Going right leads to 2 signature dour-hands, much like the ones before. Dour-hands can cast one pottable DoT, which of course, you should probably pot. After that you will have your first encounter with the stone giant Helf, who will proceed with a short speech, and then throw boulders at you. There is an orange circle where the boulder is about to land (He is, of course, aiming them at you, so try not to stay in one spot.) and the boulder will hurt a lot (almost kills the healer with 1 hit.), so avoid it. Your healer will thank you. There is one fight with 3 signature dour-hands in range of Helf's boulder throwing. After you get out of range you will encounter 2 new mobs in the mix of the others. These are elite dour-hand brutes, and the annoying dour-hand shadow callers who have a large DoT aura that follows him in the fight. prioritize killing the shadow callers first as this will end the DoT after a few seconds. All of the rest is much of the same.

Proceed until it says "The first gate has opened." This is where Guthfinn is encountered. Guthfinn will say a brief speech, and then attack.

Proceed along through the animals. The goats you encounter have a charge ability, which will stun you, and the 3 mammoths encountered can preform a knock back, so keep your back to the wall. It is a long way down.

After fighting through the animals (and the dour-hand blasters along the way), you will fight the stone giant Helf. Stone giants are loners, as opposed to regular giants, and Helf is the only stone giant encountered. The main goal here is to protect the eagle egg, as failing to do so will cause the encounter to reset. Keep Helf away from the egg as well, because his Aoe stuns, and other bothersome abilities are not helpful for the member(s) of your party protecting the egg. Occasionally Helf will call some Dour-hand blasters who will proceed to try to blow up the egg. These must be quickly killed. (1 for tier 1, 2 for tier 2) Helf can also go into a bubble, but mostly can be kept away from the egg by the tank. As the fight winds on, Helf summons one more blaster per cue (2 for tier 1, 3 for tier 2) which approach from separate directions when they reach a certain stone rubble. Eventually, if you keep the egg safe, you will defeat Helf, get thanks from the lord of the eagles, and loot your chest.