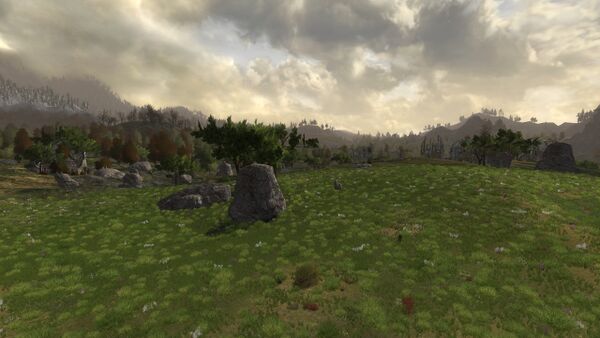 High Hollin is an area within Eregion, in the central region.

These scrub-lands are encountered upon travelling south from the forest of Glâd Ereg as well as the road leading out of Pend Eregion. The area borders the very similar geography of Low Hollin to the south as well as the slightly lusher Tâl Caradhras to the east. The western border is bound by a large trench that runs through the whole region. Outside of the sprawling ruins of Barad Morlas, the landscape is wild and untouched as seen by the handful of beast dens within the area. Lynxes and boars make up the bulk of the wildlife of High Hollin, but the odd fire-fly can be spotted among the brush as well.

The enemy, half-orcs in particular, have taken to the ruined city of Barad Morlas in an effort to plunder anything of potential value. The enemy isn't found beyond the confines of the ruins, unsurprisingly, since the rest of the area is rather unremarkable. Prior to the infestation of half-orcs, Elves would make the trip to the ruins from Rivendell to pay respects.

On the eastern border of High Hollin, adjacent to Tâl Caradhras, is the ruined way-post of Echad Eregion. Once serving as central connection to all the cities within the Elf-ream of Eregion, in present day it has been repurposed as a camp of the Elves working to combat the efforts of the enemy. Since it is the smallest of the camps within Eregion, Echad Eregion offers only minor services such as a Stable-master, Milestone, Healer, and a Supplier/Provisioner. The Elves also have plenty of work for those wishing to halt the efforts of the half-orcs within Barad Morlas. 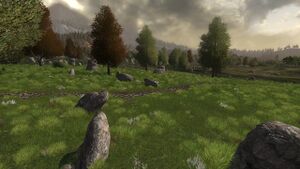 What's left of the road through High Hollin 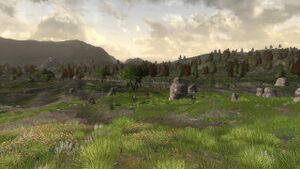 This campsite marks a place where the Company of the Ring stayed during their journey through Hollin. A careless hobbit left his mark, as well. &mdash Deed