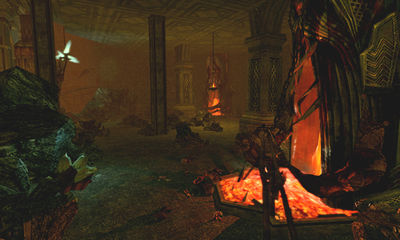 At the height of Durin's power in Khazad-dûm, the Halls of Crafting were the home of the greatest dwarf-craftsmen in the history of Durin's Folk. While not as powerful as the Heart of Fire, where Mithril was refined and forged, it was the most prolific of the dwarf-forges of Khazad-dûm. When Khazad-dûm fell to the onslaught of the Balrog, Orcs swarmed the Halls, and they were lost forever.
Now, the Orcs of Mazog have rekindled the ancient forges to produce arms and armour for their hordes as they muster to repel the return of Durin's Folk and mount an attack upon the Elves of Lothlórien. Only the Halls of Crafting contain the facilities necessary to outfit the legions of Moria. -- [1]

The Halls of Crafting is a World Instance for 6-man fellowships with three bosses; it usually takes up to two hours to complete. Once the great dwarves of Khazad-dûm crafted the purple radiance armour set pieces, which the lucky warrior still may lay hands on.

The entrance to the Halls of Crafting is in the Flaming Deeps, very near the entrances to Fil Gashan and Forges of Khazad-dûm. A campfire with rallying horn is located directly north of it.

Outside the instance entrance:

Every mob in the instance is Orc-kind. Most pulls consist of 5 level 60 elites with occasional heals and defensive corruptions. - Turbine's map

Âmbal is healed by two orcs, so they should be killed immediately.

The room is divided into 4 distinctly coloured quadrants, and which quadrant Âmbal is standing in determines the buffs that he receives throughout the fight. Generally, the best quadrant to fight him in is the green one, as it buffs his tactical damage which is not very significant. The longer he remains in one quadrant, the higher his buff stacks. If Âmbal moves from one quadrant to another, he loses all the buffs currently stacked on him and begins to accrue new buffs. (Or stacks additional buffs without losing current ones.)

Bashkuga is more difficult than the final boss. He himself is weak, but the different sectors of the floor billow up deadly flames throughout the fight.

Characters standing in a sector when it ejects flames are dealt roughly 4,000 damage in one hit. There are small flames that appear in a sector to warn players that it is about to erupt, but the warning time can be as short as 1.5 seconds. The best way to avoid the flames is to view the fight from a top down angle and position yourself next to the corner of a section so that you have multiple other sections to run to once you see the flames starting to rise.

Thaguzg may be saved by orcs that appear.

There are four doors in the walls of the room from which orcs periodically enter, one from each door at the same time, and they walk slowly toward Thaguzg. If they reach him, the daily challenge is failed. Naturally, ranged attacks are best for cutting them down before they do. Also, be sure to not interrupt his inductions since they will cause everyone in melee range to be punted. 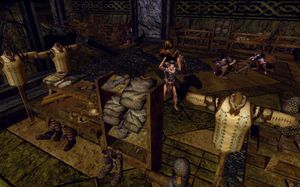 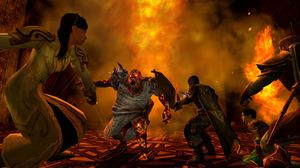 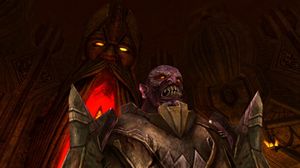 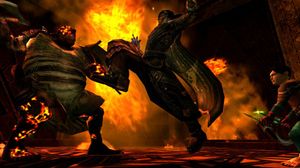 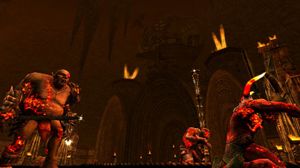