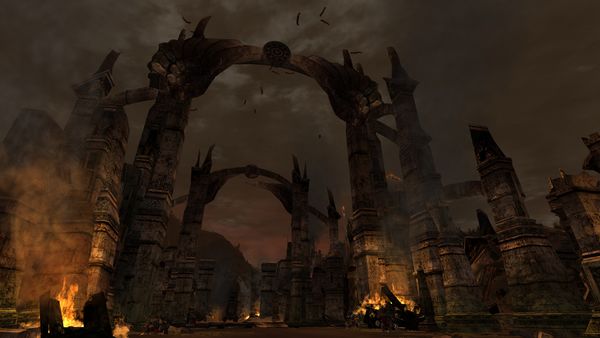 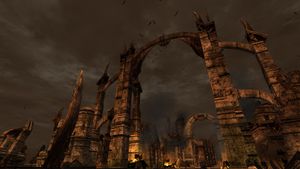 The Great Bridge as seen from the eastern side of the city.

The Great Bridge is a landmark within the city of Osgiliath in Eastern Gondor. [63.0S, 9.4W]

Lying along both shores of the great Anduin River, a city the size of Osgiliath required a major thoroughfare through the heart of the city to support the daily traffic moving from one side of the city to the other. Whether foot or freight, no smaller bridge — alone or in tandem with others — would be able to meet the demands of the city's traffic. The Great Bridge, with its wide causeway, is a marvel of engineering and construction, only possible through great feats of engineering and construction by Men learned and strong. Its like cannot be duplicated today.

When the host of Mordor approached the city of Osgiliath, Faramir and his elder brother Boromir destroyed the Great Bridge in order to hold the Western shore. The Great Bridge has been crudely rebuilt in recent days by the Orkish forces who are now occupying Osgiliath.

The Great Bridge is also a possible spawn location for one of Eastern Gondor's Roving Threats.