Gates of the Moon 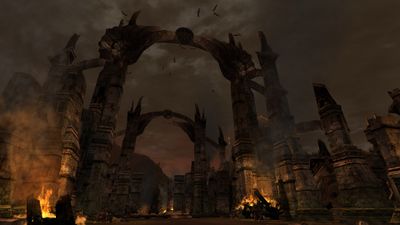 The Gates of the Moon is a landmark within the city of Osgiliath in Eastern Gondor. [62.9S, 6.7W]

Set into the eastern walls of the city, the Gates of the Moon was a great bulwark of the city's defences against eastern aggression. The gates allowed safe passage into the city for eastern travellers and commerce upon the Greenway through North and South Ithilien, as well as points further abroad. The roadway leading north-eastward from outside the gates of Osgiliath headed toward the fortress city of Minas Ithil (later to be renamed Minas Morgul) built on the edge of the Ephel Dúath.

Within the city, just inside the gates, lies the Court of Isildur.